Arthur Goldwag's "The New Hate: A History of Fear and Loathing on the Populist Right" 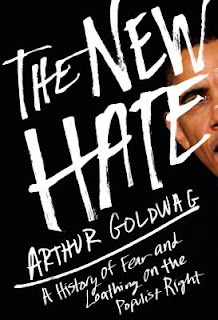 “As it’s turned out, ‘The New Hate’ is less about prejudice than it is about American’s long-standing penchant for conspiratorial thinking, its never-ending quest for scapegoats.” – Excerpt from The New Hate

Goldwag goes into detail tracing the origins of what we see today. Much of it is recycled fear from other eras of history; he describes what a conspiracy theory is and how these beliefs become fact in some people’s minds. Glenn Beck channeling an anti-Semitic Mormon named W. Cleon Skousen, Sarah Palin quoting an anti-Semitic figure during a speech, the theories of the John Birch Society, Freemasonry and the Illuminati, the new world order, Henry Ford and many others quoting an anti-Semitic text known as The Protocols of the Elders of Zion, the theories surround 9/11, and the conspiracy theories that drive Al-Qaeda and other jihadist groups are some of the things discussed in this book in great detail; the final result is a history lesson and a debunking of many of these theories.

Goldwag’s in-depth look at Glenn Beck’s rhetoric and reading material that he would suggest to his audience makes you wonder why anyone would put Glenn Beck on the air. The fascination for W. Cleon Skousen, a former police-chief of Salt Lake City, was one of Beck’s main inspirations; Glenn Beck also told his fans to purchase and read Skousen’s book, The 5000 Year Leap. Skousen’s history is filled with controversy—he was a member of the John Birch Society, he accused Dwight D. Eisenhower of being a communist, ran the Salt Lake City police department like a Gestapo, and promoted the idea of a New World Order and world government. Skousen was so unpopular amongst conservatives that even William F. Buckey, who ran The National Review, dismissed him as insane, Ronald Reagan tried as hard as he could to distance himself from Skousen, and many other conservative figures were not impressed by Skousen, either.

The one interesting piece of literature that Goldwag discusses is The Protocols of the Elders of Zion,  an anti-Semitic text that states a theory that the Jewish people are out in a quest for global domination. The writings, described and proven mostly to be a hoax, have been used many times by conspiracy theorists. The writings have been used by 9/11 conspiracy theorists to promote the idea that Israel was behind bringing down the twin-towers, by various figures to promote the idea that our banking system is part of their plot for world domination, and that things such as labor unions and liberal politics are also part of the Jewish quest for world power and the enslavement of the Christian white man. The writings also went on to inspire a number of other political figures and people such as Father Coughlin during WW2 (an anti-Semitic priest),

The history of hysteria is something in our past that we cannot deny, but it’s also starting to rear its ugly face in this modern age. Trying to make sense of many of the conspiracy theories that we have been seeing over the past few years can only be understood by examining the roots of where they come from. Goldwag’s history of these theories is a very accurate and scary piece of insight for those of us who are concerned about the future of our society. It’s a must read for any political minded person who believes in bringing reason and sanity back into our political system.

Visit Arthur Goldwag's blog HERE
Posted by Brian at 12:43 AM

Promote Your Page Too

About Brian The Bookseller

Brian
Hello! Welcome to my blog. My name is Brian; I'm 31 years old; I reside in the Palm Springs, CA area; I'm a practicing Buddhist, independent liberal, and I'm also part of the LGBT community. I've been a blogger since 2001 starting on LiveJournal (which i still maintain, but I'm no longer accepting friend requests or granting access to my previous writings on there), and I enjoy writing about a variety of subjects I also a short-lived blog related to being a bookseller until the book-chain I worked for went out of business. I have a variety of interests that include music, literature, men's fashion, and much more. I like to write about a variety of different things, and you can think of me as a man of letters. As far as my favorites when it comes to literature, I consider Gore Vidal, Dave Eggers, John Steinbeck, Vladimir Nabokov, William S. Burroughs, Jack Kerouac, and Roberto Bolano to be amongst some of my influences.